COVID-19: We continue to trade online as normal.
Please be aware that shipping options may be subject to change and expedited services may not be available in some instances.
Thank you for your understanding.

Adrian Harrington began trading in 1971, as part of Harrington Brothers in the Chelsea Antiques Market on London's fashionable King's Road. He moved to Kensington Church Street in 1997, and in 2014 Adrian relocated to the historic Hall's Bookshop in Royal Tunbridge Wells, occupying the first floor of this iconic building near The Pantiles area of the town. Hall's remains on the ground floor offering an exceptional range of quality used books.

We are always interested in buying quality books in our subject areas, from individual titles to complete collections. 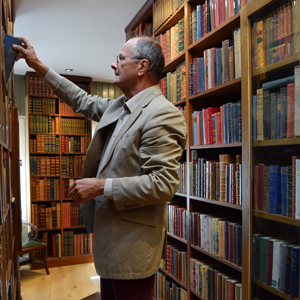 Managing Director of Adrian Harrington Rare Books, Past-President of both The Antiquarian Booksellers Association (A.B.A.) and The International League of Antiquarian Booksellers (I.L.A.B.). Our enthusiastic and energetic leader has an uncanny knack of acting like the young turk whilst also being a wise man of the book trade. No longer the 'new boy' and not quite 'old school' - more an 'old boy of the new school' of dealers, Adrian has been succesfully buying and selling fine and rare books since 1971, with the occasional pause in order to collect guitars, ukeleles and banjos. 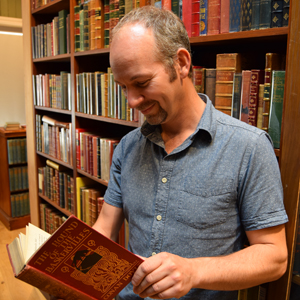 Literature specialist, specifically nineteeth and twentieth century fiction with a particular interest in strange tales, detective fiction, adventure stories, historical thrillers and espionage. Known to many as a James Bond guru, having penned the award-winning bibliography of Ian Fleming and sporadically gracing the nation's radio waves and television screens to comment on agent 007 and his creator. When not prattling on about spy novels Jon can be found tinkering with one of his increasing number of motorcycles. Mid-life crisis anyone? 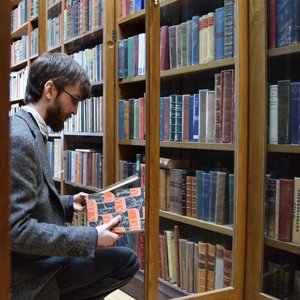 Lucas was inherited by Adrian Harrington Rare Books from Hall's Bookshop, along with the chair once graced by Viktor von Ephrussi and the ten pence bargain bin. There is a good chance that he will be at the end of any emails that you send to the shop. 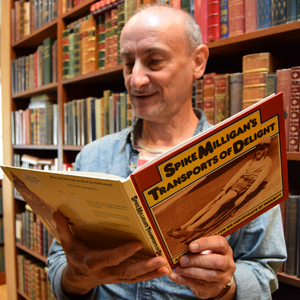 Alan mans the front desk at Adrian Harrington Rare Books and also runs our packing and shipping department. His interests include military history, vintage hi-fi, and Blues and Jazz records. 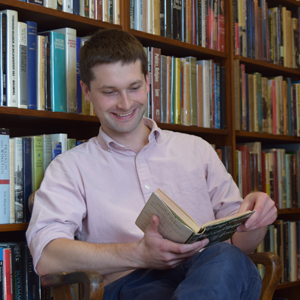 Ben joined Adrian Harrington Rare Books following its reincarnation armed with three years experience in secondhand bookselling. Blessed with the shop's worst yet most persistent sense of humour he is often spotted channeling Alan Partridge whilst ostensibly working. Splitting his time between manning Hall's Bookshop with James and cataloguing and photographing stock for Harrington's, his interests include modern history and politics, nature writing, and modern fiction. Spends most of his spare time vainly trying to improve as a cyclist in the lumpy terrain around Tunbridge Wells and engaging innocent bystanders in talk of gear ratios and groupsets. 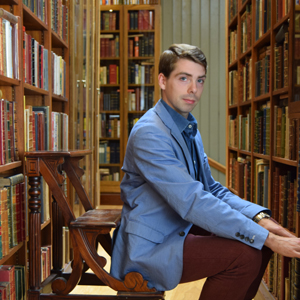 James joined joined the team at the same time as Ben, in January 2015, working part-time for a number of months before starting full-time in October. As a Byzantinist James' special subjects include the history of Constantinople / İstanbul and the sixth-century historian Prokopios of Caesarea, though he's equally comfortable discussing the relative merits of Tolstoy, Hardy, or the Brontës.